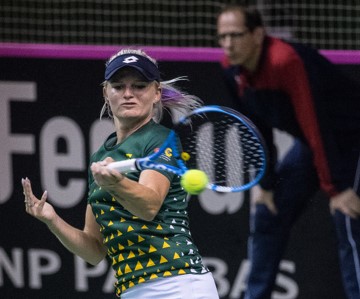 The South African Fed Cup team put up a resilient fight, but eventually went down 2-1 to Israel on the second day of their Euro/Africa Zone Group II tournament at the National Tennis Centre indoor hard courts at Esch-sur-Alzette, Luxembourg, on Thursday night.

Lina Glushko beat Madrie le Roux 7-6(2) 3-6 6-4 in the opening singles rubber in an evenly contested encounter that went down to the wire before fatigue set in, and Glushko went on to claim the  crucial third set.

The country’s number one, Chanel Simmonds, brought the tie back to 1-1 with the first singles win for South Africa in the tournament when she beat Maya Tahan 6-4 6-4 in the second singles match. Simmonds showcased her class and skill for the stunning victory.

The team’s momentum was broken when the courageous Simmonds and Le Roux pair went down 6-3 7-6(2) to Glushko and Tahan in their doubles match later on in the evening.

This is the second tournament loss for the team, having gone down 2-1 to hosts Luxembourg on the opening day on Wednesday.

Despite the setback, team captain Rene Plant was full of praises of her charges and their buoyant display on the night, saying: “It was a really tough day out there for the girls, they did extremely well and gave a top effort, which is all a coach can ask for.”

“Madrie came so close, and was a couple of points away from winning her singles match. Chanel played a good game in the singles…it was a great game of doubles, but unfortunately, the opposition team was too good. All credit still has to go to the girls, but they did give their 200 percent out on the court.”

South Africa take on Portugal in their final group encounter on Friday.